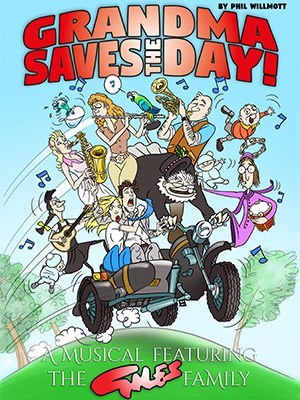 It’s Ipswich in the late 1980’s and the Giles family are thrown into confusion when the upwardly mobile Stinkletons move in next door. It takes Grandma Giles to sort it all out with a few swift blows from her brolly and her familiar battle cry – ‘Gertcha!’

Combining the much loved Giles cartoon characters with classic hit songs from the eighties including Our House, Simply the Best, Wake Me Up Before You Go- Go and many more, all played live by a multi-talented company of actor-musicians, this is a fast-moving, funny and pop filled comic strip for all the family.

Read more about Phil’s dramatisation of Carl Giles’s satirical cartoons, which appeared in the Daily and Sunday Express for nearly 50 years and were at the “forefront of British satire.”

Phil explains, “Giles would draw a warm and witty response to events in Westminster, the Royal Family or British society at large. These were usually reflected in a snap shot of the life of the wonderful fictitious family he created, ruled over by a fearless grandmother.”